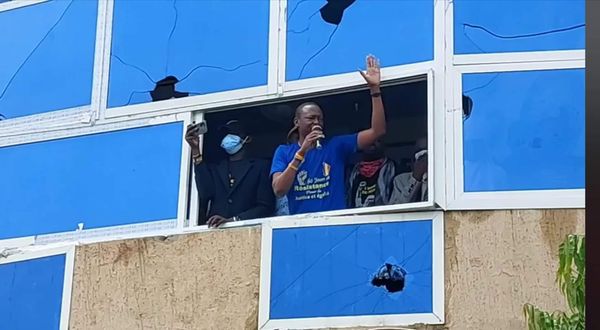 Chad’s Public Prosecutor has apparently suspended his summons of Succés Masra set for this morning at 8:00. The summons came after Masra failed to respond to the appointment initially set for last Friday. The President of the Transitional Military Council accused Masra of “not respecting justice” because he failed to respond to the original summons, although noting that the timing “was not opportune”. What the President of the TMC failed to mention was that Masra was on his way to the summons when he and the people with him were brutally attacked with tear gas by the police.

That attack, which resulted in the temporary closure of a major road in the city, turned into a standoff that lasted for over six hours. Entire neighborhoods were blanketed in tear gas as the people who had accompanied Masra and the police faced off in front of the “Transformers” political office, which is also Masra’s home. After several hours of tear gas, the police finally withdrew to a staging area nearby and the “Transformers” had a rally before police and protesters left the scene.

In the aftermath of the attack, many Chadian groups expressed their disapproval of the actions of the government. Even the MPS, long considered the ruling party in Chad, called the summons “counterproductive” and asked the government to “show more restraint”. Despite the internal pressure, the Prosecutor summoned Masra again for September 12th at 8 AM. Masra responded on social media, saying that he would respond to the summons and that the government should prepare for anyone who might “spontaneously” accompany him.

“This Monday, September 12, I will leave at 7 a.m. from the headquarters of the Transformers which they attacked, to respond to their summons to the court without a stated reason, because the summons was postponed for this Monday, September 12 at 8 a.m. after their armed forces compelled us to return to headquarters. If they are in good faith, they have the time to take measures to supervise all those who, spontaneously, come to accompany us there by marching and singing “justice, equality”. Unless they are afraid of the people.”

However, after a joint statement from the embassies of seven western countries and several delegations on Sunday, the government backed down. The embassies reminded the TMC of their “attachment to the exercise of public freedoms in respect of the principles of the rule of law and the laws of the Republic, which are binding on all”. After this statement the Government Spokesman, Abderaman Koulamallah, announced that the summons had been suspended to “allow the dialogue to take place serenely”.

“The position of justice and the restraint shown by the government are neither a weakness nor a renunciation of the rule of law. Democracy is also everyone’s responsibility. The rule of law will assert itself and if you play too much with fire, you will end up getting burned.”

Koulamallah also accused Masra of using the suspension to “add fuel to the fire and to victimize themselves excessively” although there is no evidence of that on the “Transformers” official social media. Despite the cancellation of the summons, there is a heavy military and police presence out this morning. The TMC does not seem willing to take any chances with another demonstration, regardless of how peaceful it might be.