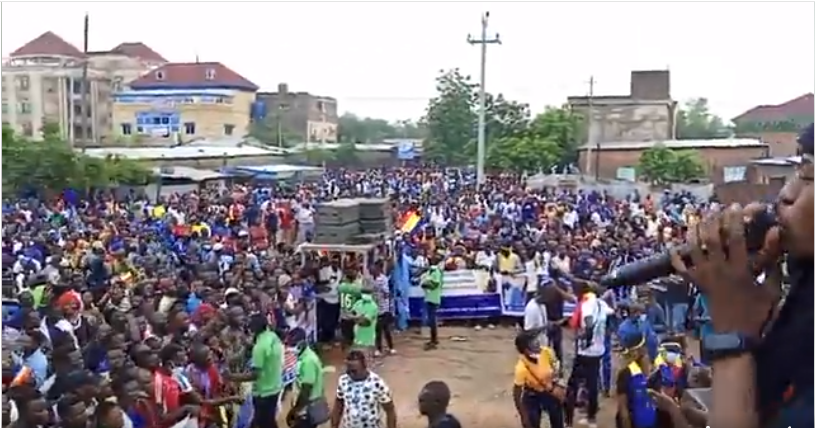 Wakit Tama’s march yesterday seems to have failed due to a very feeble turnout and a heavy police presence. Today, however, the “Transformers” are out in force. A view from the area near their office in N’Djamena shows over one thousand people already at the meeting, where singer Ray’s Kim is leading the crowd in their favorite anti-government songs. The crowd continues to increase in anticipation of a message from Succès Masra, the president of the party, about the creation of a “parallel government”.

The “Transformers” have refused to join the dialogue that starts today and announced plans to create a “parallel government”. According to the “Transformers”, the current government is only in power because they took the power by force. They feel that they are entitled to create a democratically elected government that will follow the will of the people. Their intention is to somehow create that government at the meeting today.

So far their meeting seems to be unhampered. Aside from a few men in police uniform on stage and a large volunteer security presence, the police are noticeably absent. This is a bit unexpected as the “Transformers” office has been surrounded by police forces multiple times and for days on end in the past, and this is the first time they’ve tried to create a parallel government. However, the police might well be busy elsewhere.

The National Inclusive Dialogue is due to start at ten this morning at the “Palace of Culture” in the N’Djari neighborhood of N’Djamena. Multiple groups have threatened to protest at the opening ceremony of the Dialogue that is supposed to finally resolve problems that Chad has grappled with for over thirty years. Most notable among the groups threatening to protest is the Zaghawa community. They intend to block the doors of the Palace of Culture this morning if an activist they say insulted the community is not brought to justice.