The United States of America asks Mahamat Deby not to run for President. 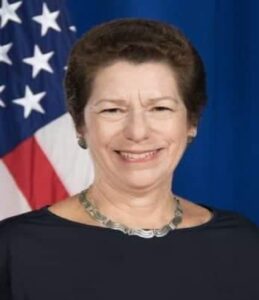 N’DJAMENA–Ellen Thorburn, the Chargé d’Affaires, a.i. to the Republic of Chad from the United States of America. asked members of the Military Council of Transition not to run for president in the upcoming elections. As part of the July 4th celebration at the embassy, Ms. Thorburn used her speech to remind the CMT of their responsibility to the Chadian people. Although the USA had initially made several statements regarding the transition, this seems to be the strongest statement since the beginning of the transition.

Ms. Thorburn went on to say that the United States would “continue to emphasize the rule of law, human rights and accountability”. She also stated that the USA shared an expectation for the successful start of the National Dialogue, which has been pushed back several times since it’s original date at the end of last year. Finally, she left the Chadian people with “a word of caution” to work together towards a compromise that would give Chad “peace, stability, and prosperity”.

We will continue to emphasize the rule of law, human rights and accountability, and we will focus embassy efforts on strengthening the civilian institutions that enable Chad’s transitional government to be more attentive to its citizens. Our strong working relationships with host country security and law enforcement institutions, as well as with our international partners, are the primary means by which we support the improvement of human rights.

The United States is Chad’s partner in this transition; we want it to succeed. We acknowledge the difficult but rewarding work done towards the completion of the pre-dialogue in Doha and we share your expectations for the successful start of the national dialogue. In addition to the unwavering support that the United States will provide, I also offer you a word of caution. With so many elements of Chadian society involved in the dialogue and generations of entrenched power centers vying for concessions favorable to them, to right past wrongs or to retain power, the talks will fail if each party does not keep in mind the national aspect of the national dialogue. If every group participating in the dialogue works towards a compromise, no group or faction will get everything it seeks. But Chad will know peace, stability and prosperity.

Ellen Thorburn, Chargé d’Affaires, a.i. to the Republic of Chad