One Suspect Captured By Police, Others Still Wanted 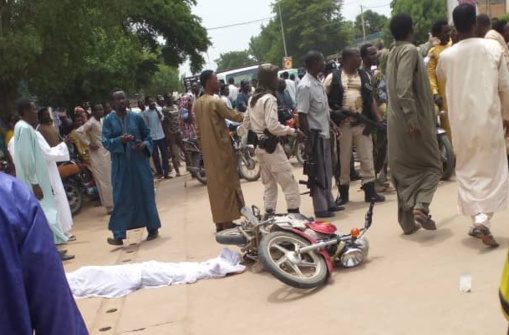 After the recent murder of a motorcyclist in broad daylight, the police began an investigation and fairly quickly were able to identify one of the suspected murderers. Despite the quick identification, it seems that nothing was done until a fight broke out at the suspect’s house on Tuesday morning. After the period of mourning was finished, the family of the victim, armed with guns and knives, went to the suspect’s house to avenge their murdered family member.

The police quickly intervened with tear gas, and the suspect’s house was put under surveillance, likely more to protect the suspect and his family than to keep him from escaping. Later on Tuesday, the suspect was arrested and presented before the public on national television with the vehicle used to make the attack. The suspect was wearing military clothing but his face was blurred, leading many people to believe that the police were protecting the murderers as they are thought to be related to those in power.

The truck, a newer model double cabin Toyota Hilux with tinted windows was also presented as proof that the police had captured the murderers. The vehicle also gives clues to the identity of the suspect as many Chadians cannot afford a new Hilux, and certainly wouldn’t be permitted to drive it without license plates or with darkly tinted windows. This drives further speculation on social media and on the streets about the identity of these murderers and the motives behind the murder.

Police Commissioner Paul Manga congratulated the police on their quick work, and also thanked the population for their collaboration with the investigation. While he didn’t reveal the identity of the suspect, he asked the public to ignore the “smear campaign” on social media. The murder provoked many posts on social media, most denouncing the insecurity and lack of justice when certain ethnicities are involved in crimes.

Whether or not the police release the identities of the suspects, this will likely become a point of contention between the government and the population. Even if a trial can be arranged and the suspect condemned, recurring complaints about condemned prisoners with connections to those in power being released could make it hard for the population to feel safe again. It’s possible that the family of the suspect will choose to settle out of court by paying the “Diya” or blood price to the victim’s family.

Will this event become a bigger issue that adds to the growing tensions between ethnic groups? A lot depends on the government’s response. Transparency and justice will be crucial to avoid bigger issues in the future.